Dune! is a visually satisfying little scroller available for free on the App Store. The objective of the game is simple: you are a little round object sliding across rolling sand dunes, getting in some serious air time and attempting to make a “smooth” landing back on the ground. You earn points in three different ways in the game: going over the white line above the dunes, getting high enough in the air to reach the moon, and achieving those “smooth landings” that make Dune! the mobile gaming equivalent of those “oddly satisfying” videos that clog your Facebook feed. Once you “crash” into the side of one of the dunes, it’s game over, and you must start again from the beginning. 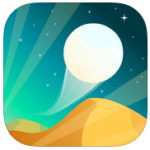 I enjoyed the minimalism and the simplistic serenity of Dune!, its meditative visuals reminding me of being a child and staring out of the window in the backseat of my parents’ car. I could definitely see myself putting on some calm music and playing this for several dozen minutes in order to decompress. Another fun part of Dune! is the simple achievements you’re able to unlock. When you reach specific milestones, such as earning a certain number of points, playing a certain number of games, or reaching the moon a certain number of times, you earn different backgrounds, different “sand,” and different round objects for your character to be. For example, putting the round object in reverse earned me the ability to change the circle into a vinyl record, much to my pretentious delight.

For all its perks, however, Dune! does have some shortcomings. Personally, it took me a while to figure out the mechanics of the game. I was crashing for quite some time before I really got the physics down. Another downer was the constant stream of ads. I understand that it was a free download and that these developers have to finance the game somehow, but most of the ads I encountered while playing dune were (unskippable!) 30-second ads between each round of the game, which tends to ruin the calming experience of the game. For what it’s worth, an ad-free version is available for $2.99.

Overall, however, the gameplay of Dune! is very smooth, without the lagging and crashing that I’ve seen from similar games, and it’s definitely a game that I’ll be keeping around for a while.